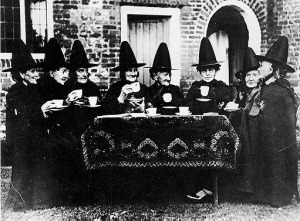 MacBeth and Verdi. Last week, I went to the Marseille opera, and enjoyed 3 hours of lyrics and songs. The program was Macbeth by Verdi. Sat on a nice theatre, upper circle, I spent 3 hours listening to Mister MacBeth and Lady MacBeth, singing and dying (sorry for the spoiler, but I promise those are not the only ones to die in that Shakespeare piece). The MacBeth drama relies on prophecies offered by some witches to MacBeth, while having a walk with a friend. Those prophecies, are about Macbeth becoming a king and getting powerful, and dying one day (that last one was easy, we all do one day). MacBeth hears that, gets crazy about it and completely embeds those revelations to forge his destiny. He will kill friends and relatives for that (oups, sorry again), that in the end, the prophecies becomes true. This is an excessive story, yes, but this is an interesting one.

Thinking more about prophecies. I realized that I met some witches (not real ones, okay ? magic witches and psychic do not exist, kids). I met some good and bad ones. The ones that look at you and whisper some divination, formulating some nice destiny for you. Why don’t you do this ? Would not it be great if you were blablabla ? Yes, I met some witches – but I’ll keep their names and prophecies secret – they know who they are. The words they spoke were not about giving advice, but about imagining my future. This could be in the form of a game, a joke, a provocative thought.

So what ? Listening to MacBeth lyric voice, and witches chorus, I acknowledged how important it was for me, to be projected into positive (and negative) scenarios. This is not because I have no idea of what to do with my life, I have lots of ideas. This is because by being suggested a possible path, a position, by someone neutral (well, kind of), this forced me to think about that. For some of the fate, I answered “Yes ! That would be sooo great”, and thus I put some energy into making them real. It created huge desire to realize it, and it happened.

So here is a game. Next time you meet a new person, staring at you after few exchanges, and formulating some strange ideas about you and your destiny. Listen. That proposal might be a alchemy between her own dreams and what you inspired to her at a glance – but innovation is made on mixing strange ingredients, and pushing boundaries, right ? Take this as a game and think about those predictions. And you can decide to try to make them true or not.

Note 1 : Witches are not Roger, dont mix it…

Note 2 : you can meet great witches in networking event.

Note 3 : thanks to my kind witches, with love …